We’ve Finally Reached the Golden Age of Design. Now What? 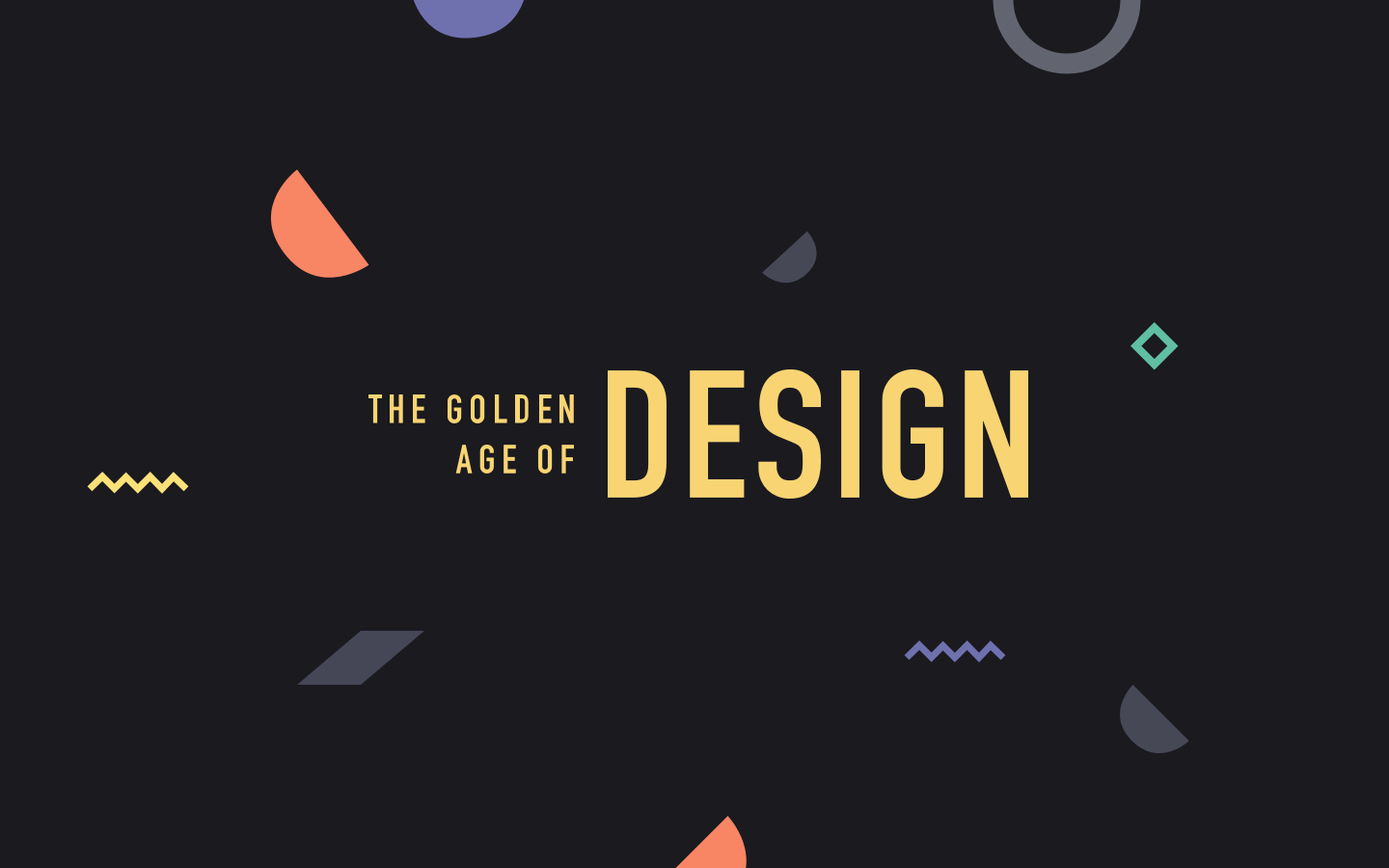 Contrary to what many people might believe, designers are no longer emerging from design school.

Instead, many of today’s designers fall into their roles from unconventional career paths. In fact, some of the brightest designers I’ve crossed paths with have degrees in physics, psychology, english and political science.

With the evolution of technology and its adoption, design challenges have become much more complex and, as a result, designers are required to have more critical thinking than anything else. For what seemed like forever, design was most commonly associated with the graphic and visual arts; it used to be about the paint strokes on the canvas. But today, It’s no longer just about typography, kerning or color palettes. The trade has become more about problem-solving, asking questions and empathy. In addition to visual design, the modern designer has competencies in research, strategy and sometimes code.

That said, designers are still just starting to scratch the surface of their role and influence not only in business, but in shaping the future of technology.

So here we are… at the Golden Age of Design. Now what?

More than ever, feelings matter in design.

We’ve come a long way since the emergence of web design, but design for the web and software is still in its adolescence. Since the early 2000s, emotion has never really played a role in driving online conversions. The web’s early adoption was much more dependent on speed and functionality than anything else. It just needed to work.

For example, in 2007, Google attempted a design facelift by famously A/B testing 42 shades of blue for hyperlinks to find out which one people clicked on the most down to the decimal point. As far as Google was concerned, their growth was centered around speed. The best design was no design at all, because anything else simply slowed them down, so engineers were making most of the front-end decisions. Google’s shift to a design-centric companyhappened only once they nailed speed.

Google, like most tech companies today, shifted their attention to design as a method of differentiation. Generally speaking, technology as far as performance and scalability has advanced enough to create a level playing field. As a result, design went from a “nice-to-have” to a “must-have” in order for today’s brands to succeed. We’ve progressed up, what I’m calling, the Technology Hierarchy of Needs and are now considering more seriously the emotional responses and associations with what we make.

Less of today’s technology problems lie within the backend technology and lie more in the interface and interactions. Software has been integrated so deeply into our lives that it has begun to self-actualize.

It’s also a big reason why emotional intelligence plays such a large role in today’s design process. Until recently, designers have approached software in a very task-oriented fashion, crafting clicks, touches and swipes. Now more than ever before, people are interacting with software and websites like it’s a human. Good design considers how people might feel using our products in the same way we would think about having a conversation with another person.

I’ve recently noticed a lot of excitement around a new design reference. I can’t seem to escape all the new conferences, Meetups, books, workshops and speakers around service design. Everyone’s talking about it, and it’s yet another kind of design that we’ll have to add under the design umbrella.

Despite the various labels for design, all designers, at their core, are just making things, digital or physical, while putting themselves in their users’ shoes. The type of design is just the means in which the designer does so.

What’s more interesting, and somewhat obvious, is that the emergence or popularity of specific buzzwords are a clear indication of the general direction that the industry is moving towards. Consider the shift from Web Design to Mobile that occurred in the late 2000’s. With the invention of the iPhone and app store, brands recognized the opportunity to create a presence where most of our attention was: our phones. This presented new challenges and opportunities to Web Designers to create experiences that fit in our hand.

All of a sudden the term UX Design became all the rage. Although the term was coined decades prior, the explosion of its usage in reference to designing for human interfaces reflected the shift from websites to native mobile applications and software. Websites became just part of a bigger ecosystem: digital products, API’s, social media presence, search engine optimization, customer service channels, and physical locations. All of which are now things that inform the UX.

Today, there appears to be a similar shift in the design community to something much bigger than UX. For better or worse, Service Design is becoming the latest buzzword that many companies are getting excited about.

There are some profound implications to this shift: wide application of design has, in linear fashion, progressed from print to web to product and now to environments and organizations in the last decade.

Is this wave of service design indicative of new technology and the problems that come along with it? Or more importantly, is it indicative of a new type of designer?

The design medium is continuously changing.

The evolution of the modern designer is influenced by the evolution of the ‘canvas’ on which they design. So, from devices to screens and now to the actual environments around us, designers are evolving their skills (both hard and soft) to solve new problems and make our experiences more meaningful.

In parallel, the Internet-of-Things (IoT) has developed rapidly. It’s growing even more in coming years, quickly providing all of us with access to it. According to Gartner, the number of connected devices in the market will grow almost 50-fold by 2020. On the other hand, devices as we know them, tablets, laptops and phones, will merely double by 2020. The “things” that can connect to one another and to our devices are expanding rapidly and the difference in growth will open up endless possibilities for new products.

The growth in connected devices will create yet another shift in focus and will present new challenges for designers as we think through usability and usefulness in an integrated environment.

We’ve been dreaming of the IoT for a while, and while it’s still very raw and underdeveloped, it’s finally beginning to affect the consumer market. One of the main pressure points for designers is the emerging fluidity across “things,” so to speak. The growing pains aren’t in the design of interfaces, but challenges related to multiple interfaces and integrating multiple things on one interface.

In Shelley Evenson’s talk at SX15, she mentions “liquid expectations” or the state of mind, “where everything competes with everything, and peoples’ expectations transcend expected boundaries.” For example, when I’m reading an e-book on my phone, I can pick up where I left off on my tablet because the two devices communicate. We’re beginning to expect that kind of interoperability.

Plenty of connected devices that are entering the consumer market are smart and useful. However, their viability will rely on the same fluidity. For instance, today you can’t use your Nest to adjust the temperature in the room as a result of activity occurring on your fitness tracker. Your fitness tracker and smart thermostat each have their own mobile app and each require their own learning curve. This type of fragmented UX, when scaled to, say, a smart home, might make our lives more complicated instead of more enjoyable even though the individual device intention is to make our lives easier.

Perhaps this is what Google’s design team was thinking when they decided to standardize interface designs with Material Design Guidelines. UX challenges may benefit from universal styles to counteract fragmented experiences across different devices. In the same way gestures on your phone quickly became instinctual patterns (pinching and swiping), new patterns will begin to emerge in our environments.

This change in context and technology requires a different design approach just like previous shifts. Even with standardized interface design, we can’t just pop an iPad screen over every new ‘things’ in the IoT. What if good design is about avoiding the screen altogether? What if good design is about avoiding interactions all together? There will absolutely, positively be new design challenges that we’ve never seen before, and we’re going to need new approaches to solve them.

What’s next for designers?

Our traditional knowledge and practice in usability and design is not really applicable to the IoT as it’s defined today. In fact, if we conduct a heuristic analysis on today’s IoT devices, we probably won’t like what we see. So it is our job as designers to research the experience of end users with these new devices, and optimize accordingly.

More than ever before, physical objects will also become digital ones, and modern designers must expand their pallet once again to solve these new problems on an ever-growing canvas.